Bombay-born Sanchita attended Ecole de la Chambre Syndicale de la Haute Couture Parisienne, Paris, and completed a Masters in Fashion and Technology from Domus Academy, Milan, before doing her apprenticeship with Issey Miyake in Japan. She has since worked alongside Alexander Mcqueen, Franco Moschino, Tom Ford, Alber Elbaz and Romeo Gigli, A childhood in Vienna and Egypt, schooling in England, Paris and Milan, and a strong attachment to her Indian roots, are all threads in the rich tapestry of visual and cultural references to be found in Sanchita’s work. A Japanese dyeing technique on an Italian velvet with Indian natural indigo, draped in contemporary European shapes, is one example of the layering involved in each piece.

Over the years, Sanchita has collaborated on industrial design and fine art projects with brands such as Swatch, Alessi and Swarovski. She consults with luxury fashion houses developing bespoke textiles and shoes, while continuing to build her eponymous label. She divides her time between Bangalore, Paris and Milan.

In December 2015, Sanchita was conferred with the honour of the “Knight of the Star of Italy” recognising her contribution to Italian fashion. 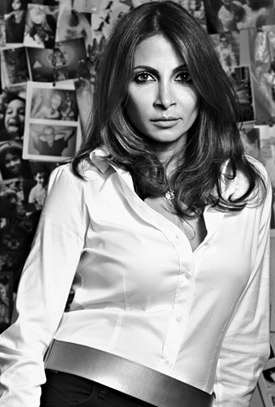